In order to control the fluorescence of quantum dots, the authors proposed a method for inducing surface plasmon by using picosecond pulsed laser on a gold nanograting surface to excite CdSe quantum dot fluorescence. In this paper, a nano-grating structure with a period of 680 nm and a groove depth of 32 nm was prepared on the gold film surface of silicon fund by AFM etching. The grating structure was numerically simulated by COMSOL and found to be able to obtain the best excitation effect in the incident light wavelength of 580 nm, and produce a significant SP (surface plasmon) effect at a resonance angle of 26° 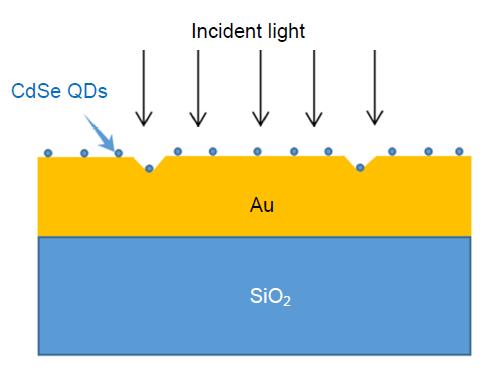 Schematic of CdSe quantum dots being excited on the grating surface

The CdSe quantum dots with organic molecular ligands were attached to the surface of the nano-gratings by self-assembly method, and the fluorescence enhancement and fluorescence saturation of QDs were measured by adjusting the power of picosecond pulsed laser on a micro-Raman measuring platform.  The results showed that the structure of the gold nanograting and CdSe QDs could greatly enhance the far-field fluorescence of CdSe QDs, and the strongest peak appears at 582 nm with saturation power, The experimental result is in great agreement with the simulation of the grating structure which can achieve the best effect of excitation at 580 nm, the maximum fluorescence intensity was up to 7.80 times, and it got saturated rapidly at the point of reaching the maximum intensity. The method for enhancing surface fluorescence used in this paper has a simple structure and is easy to implement, and the structure can enhance the fluorescence signal, which has practical reference significance for the development of a spectral sensor substrate with high enhancement effect.

Professor Qin Shuijie’s research team of Guizhou Provincial Key Lab for Photoelectron Technology and Application focuses on laser technology and its applications, new nano-sensing technology and devices, and  opto-electric nanomaterials research at present. The team currently has 2 professors, 1 associate professor, and more than 20 master/doctoral students, including majors in optics, mechanics, and electronics. Professor Qin Shuijie is a provincial management expert in Guizhou Province, a leader of academic disciplines at Guizhou University, a member of the Laser Processing Committee of China Optical Society, editorial board of the journal Micro-Processing Technology and China Materials Research and Technology Equipment, hosted or participated in the research work of 22 research projects, including the National Major Project, National 863 Program, National Natural Science Foundation of China, and the Excellent Science and Technology Talents Fund of Guizhou Province. He published more than 100 academic papers as the first or correspondent author, and obtained more than 10 national invention patents. 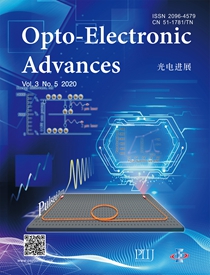 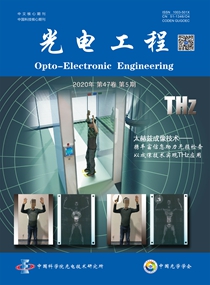 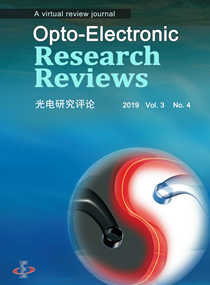