Terahertz (THz) technology has attracted a progressively growing interest from the scientific community in the last three decades. This particular region of the electromagnetic spectrum, with frequency between 0.1 and 10 THz, has peculiar capabilities in interrogating material properties and represents a powerful tool to obtain complementary information to that provided by infrared, visible light or microwaves. In this context, one of the most appealing applications is clearly the possibility of forming images. THz imaging systems have been studied extensively starting from the late 90s. Ever since, the main limitation to their broader spread has been the long acquisition time required for the image formation. The reason is the lack of affordable and sensitive multi-pixel THz detectors, which forces to perform a pixel-by-pixel scan of the object, by mechanically displacing the object itself or the imaging system. Significant efforts have been recently directed to overcome this drawback and one of the most promising approaches in this sense is the so-called “single-pixel” imaging. This imaging scheme is based on illuminating the object with a series of light patterns, whose pixels are partially on and partially off. Subsequently, the whole illuminating light is collected with a single-pixel detector (i.e., with no spatial resolution). By associating each of the patterns with the corresponding detector output, it is possible to indirectly reconstruct the image. Besides avoiding the object displacement to perform the pixel-by-pixel raster-scan, this imaging technique has the great advantage of enabling the implementation of the so-called compressed sensing (CS) theory. In principle, in order to form the image, one would need the number of illuminating patterns to be equal to the number of pixels. CS shows that, with the proper choice of illuminating patterns, an appropriate reconstruction of the image is possible with an incomplete set of measurements, i.e. using a number of patterns significantly smaller than the number of pixels. Overall, this can result in a reduction of the acquisition time. In this review, we cover the experimental solutions proposed to implement such imaging technique at THz frequencies, as well as some practical uses for typical THz applications.

The group of Prof. Razzari at INRS-EMT has been involved in research on THz science and technology for several years. THz radiation lies at the edge of the operating regimes of electronics on one side and photonics on the other, and because of this possesses plenty of intriguing capabilities in interrogating material properties. Alongside research on THz radiation - matter interactions and the characterization of novel THz sources, in recent years, the group started focusing on THz imaging as well. The possibility of forming images represents indeed one of the most attractive uses of THz radiation. The reasons are the unique ability of this radiation of “seeing through” a multitude of compounds opaque to visible light, as well as the low THz photon energy that makes it safe to use with sensitive and biological materials. In addition, the significantly shorter wavelength in comparison to microwave radiation allows to achieve resolutions in the order of 100 microns at the diffraction limit (λ = 300 µm, at 1 THz). These unique features opened the route to a great number of possible “real world” uses of such technology, spanning from security monitoring, quality and safety control in industry, to biomedical as well as art conservation applications. Despite this great potential, a larger diffusion of THz imaging technology is hampered by the very long acquisition time required to form images with currently available systems. In this regard, one of the most promising solutions to enable fast THz imaging with no bulky moving parts is represented by single-pixel imaging. This scheme makes use of a series of spatial light patterns to illuminate the scene and a single detector to record the total light interacting with the object. Such imaging technique has been extensively studied in contexts other than THz, and it is still an active topic of research, in particular for the related possibility of applying the so-called compressed sensing theory (CS). The latter describes the conditions under which an image can be reconstructed with a number of illuminating patterns smaller than the number of pixels. Single-pixel imaging is thus an effective way to reduce the acquisition time in THz systems and for this reason many research groups have been working on the topic in the last years. The aim of this paper is to review the different implementations of single-pixel imaging into THz systems, in order to provide the reader with an overview of the state-of-the-art on this very active research field. 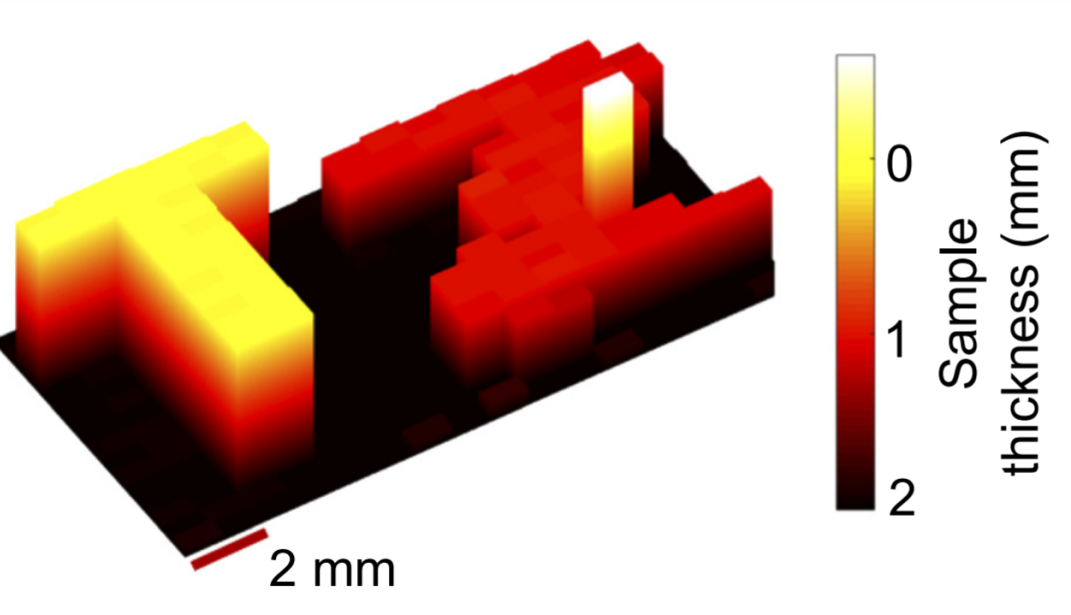 The group of Prof. Luca Razzari is based at INRS-EMT, a graduate school located in the Montreal metropolitan area (QC, Canada) offering MSc and PhD training. Their research is directed toward investigating the fundamental aspects of radiation-matter interactions on unusual temporal and spatial scales, in view of creating novel tools for photonic applications. To this end, nanophotonics, which studies the interaction of electromagnetic waves with nano-objects, is exploited at the ultrafast (down to few femtoseconds) and ultra-broadband (from ultraviolet to terahertz) levels. Nanophotonic tools are able to bring light down to the nanoscale, strongly enhancing the local electric field, and thus carries great promises for an effective miniaturization of photonic technologies and for the on-chip integration of linear and nonlinear optical functions with state-of-the-art electronic circuits.
The group also employs ultrafast terahertz pulses (1 THz corresponds to 1 picosecond in time and 300 microns in wavelength) for spectroscopic and imaging applications. Fundamental studies involving the coupling of such radiation with low-energy elementary excitations, as well as more industrially-relevant implementations for sensing and material properties monitoring are targeted. Terahertz waves oscillates at frequencies that ideally bridge the gap between the operating regime of electronics and the realm of photonics.